Recently the good people at Karas Pen Co launched the Reaktor line; A budget-friendly batch of machined pens that are decidedly distinct from the core catalog. There are a few features of the Reaktor Line that set these apart from the K and Ink, so let’s take a closer look at the Starliner XL and see what’s new!

The Starliner XL is a $55 base-price fountain pen that utilizes the popular #5 Bock nib and feed, with nibs available in steel, titanium, and 14k gold. The same options are available on the standard Starliner, which is a half-inch shorter iteration of the pen.

As you may have noticed dear readers, I have a sickness; A terrible fever for which there is only one known prescription: More pens. (That is my roundabout way of saying I bought two of these in a fairly short period of time.)

Similar to my experience with the Fountain K, I found the machined aluminum barrel and grip of the pen to very comfortable with a clean finished look. Just like the pens which came before, the Starliner’s smooth grip unscrews to grant access to the standard converter, and the feed housing threads out for deeper cleaning as needed.

Unlike the others, the Starliner uses a snap-cap mechanism which means no threads between the grip and barrel. I’ve never found the threads to be an issue personally, but the near-seamless transition is both comfortable AND aesthetically pleasing.

I ordered my first Starliner XL with an extra fine titanium nib. At a starting price of $55, the extra cost of a new (to me) nib style was an easy call. My second Starliner was ordered with a standard steel extra fine Bock nib.

The steel nib is pretty standard; aside from being the larger style #5 nib than what Karas used to order, there isn’t much worth writing home about with a German steel nib. It writes well, and I still use it somewhat daily. That titanium nib, however, warrants a bit of discussion.

The first titanium nib I received did come in with a bit of an issue. The tines were tweaked, for lack of a better term, but the Karas Pen Co support team took care of that with incredible haste. Within a week I had a new nib in hand and the defective piece was on its way back. If you take nothing else away from this review, know that the Karas customer care team is on point.

As I mentioned, the titanium nib was a first for me. As such there was a bit of a learning curve. For those who have yet to use one, titanium nibs are somewhere between steel and gold in terms of rigidity. There is some flex and line variation with titanium, but it does not feel as soft on the page as the few gold nibs I’ve used from Platinum and Pilot. The other key aspect of this nib is its output. While this is technically a German extra fine, the line it lays down (without additional pressure or flex) is closer to a full fine or even medium nib. Wile it is a fairly wet writer, compared to other Bock nibs I’ve used, the nib and feed do have a little trouble keeping up with the flex. In my tests, railroading has been a bit of an issue.

The flow is on the wetter end of the scale as well. In order to verify that it wasn’t the feed or housing causing this excess of ink, I swapped between a few of the #5 Bock nibs already in my collection. With such broad lines and high output, I really have to think twice about what notebook or paper I’m about to use. But on the other hand, it is pretty great for testing new inks for sheen and shading. Ultimately, for me, this is not an everyday use nib.

It’s no secret that I’m a fan of Karas Pen Co’s design style, and the Starliner XL really adds to an already impressive catalog. I have three K Series pens in my collection; The Render, Fountain, and Mini, and they are all incredibly well designed. They are comfortable, stylish, and very durable writing instruments. The Starliner ticks all the same boxes, but with a slick vintage-inspired design.

Be body of the pen is slightly slimmer than the Fountain K, and has a more noticeable taper towards the end of the barrel. While previous Karas pens have used threaded caps, the Starliner uses a snap-on cap. While they did have some issues with loose caps around the initial launch window, I personally prefer a slip cap to a threaded one. I find this cap style much quicker and easier to use, and it is fairly uncommon with fountain pens. There may be cause for concern about the air seal inside of the cap leading to more dry-outs or hard starts than a thread-sealed cap, but I have not experienced any issues with my two Starliners.

Due to the change in cap style, the grip section is also quite different from previous models. With a much deeper angle on the finger rest and a nearly seamless transition from grip to barrel, I personally mark this as an improvement to the writing experience.

One issue I did have, however, was a fairly wobbly cap on my second pen; the Morning Launch limited edition. According to Karas Pen Co, this is a result of some design changes to the cap which ultimately aid in the overall function of the pen. This minor issue is present to some extent in ALL of their slip-cap pens. While this may be a deal breaker for some users, I personally love the pen more than I hate the wobble, so I got over it.

All things considered, though the grip is smaller than many of the pens I use regularly, the smooth lines and finish really provide a great writing experience.

For a machined anodized aluminum fountain pen with a Bock steel nib and Schmidt converter included, it’s difficult to find a problem with the $55 price tag. While there are far fewer color and trim options available, this is a great looking addition to any collection. For my money, I’d either save the extra cash and stick with a steel nib or save up for a gold one. The titanium nib, while unique, is just not a great nib for everyday use. That said, if you’re looking for a great pen that will last a lifetime, you really can’t go wrong with a Karas. 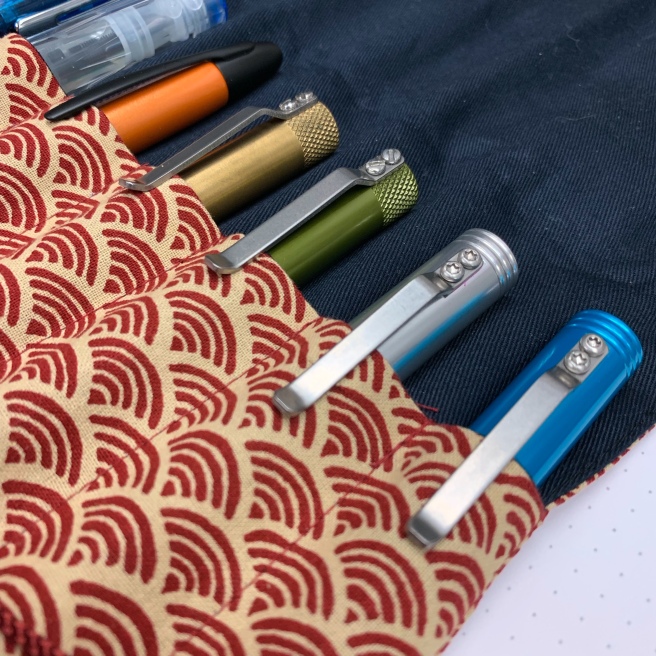 Check out the Starliner XL by Karas Pen Co. HERE

And the rest of the Reaktor line HERE

Disclaimer: The product in this review was purchased by The Poor Penman for the purpose of review and to feed the addiction. All opinions stated are those of the author.