Baron Fig’s latest limited edition Squire pen launched in October. Much like its namesake, the Insightful Spectre vanished as quickly as it appeared. Although we’ll have to wait for the next limited edition, the classic Squire pen is now available in four colors that make the pen a unique standout without breaking the minimalist tradition. Baron Fig was kind enough to send a Spectre my way for review, so let’s take a look.

The Pen is Mightier Than The Sword

The Squire is a twist-action retractable clipless pen cut from a single block of aluminum. It uses a Baron Fig branded Schmidt P8126 rollerball refill that writes as smooth as it does wet. The pen measures in at just 5 inches long, 0.4 inches around, making it roughly the same length as a Retro 51 Tornado, but thinner across the length of the body. This width is not uniform, however, as the Squire widens ever-so-slightly toward the tip. This barely noticeable element of the design prevents your hand from slipping down the pen while you write, and makes it very comfortable to hold. 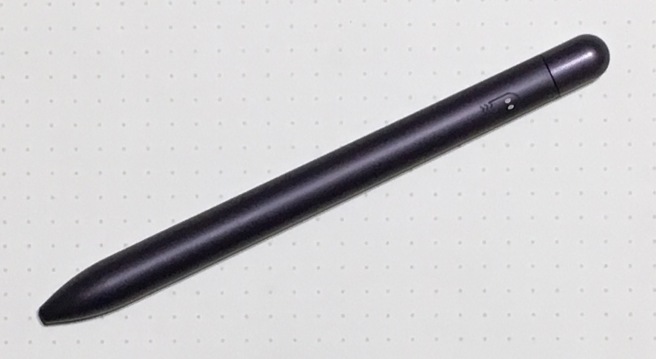 On the back end of the pen, the twist mechanism that produces the cartridge sits almost flush with the pen body. Turning it clockwise will draw out the tip, and turning it counter clockwise will retract it. Sounds simple enough, but when you turn the section you can feel the mechanism lock into place in either position. It has a far more satisfying feel than other twist pens I’ve used. While it may not sound like much, a soft or gummy twist mechanism can really kill the experience of a pen for me. When the time comes to replace the cartridge, turning that mechanism counter clockwise will also unscrew it completely to gain access to the refill.

Writing with the Squire feels comfortable. The pen is hefty without being heavy, and the finish provides an almost textured feel. I never feel like I’m at risk of letting it slip out of my hand or letting my hand slip while I write. While the complete lack of any clip or roll-stop has led to one or two close calls on the desk, the slightly angled shape usually causes the pen to roll at an angle rather that straight over the edge. Additionally, the aluminum build feels sturdy enough to withstand drops off the desk, but I’ll hold off on intentionally testing that for the time being.

It’s What’s Inside That Counts

As I mentioned, the Squire uses the Schmidt P8126 refill. Fans of the Retro 51 Tornado will recognize this as an incredibly smooth rollerball cartridge that works pretty consistently across most paper brands. I’ve noted previously that I’ve had some difficulties with these refills on coated paper like Rhodia, but standard over-the-counter notebook paper or other non-coated brands will do fine. The line is thick and dark and somewhere around a .5 line width, and has OEM replacements available in blue, red, and green.

When it comes to ink on the page, the Schmidt puts down almost as much ink as a fountain pen. I would even go so far as to say it’s TOO inky, as I experienced some feathering even with Baron Fig’s generally fountain pen friendly paper. That’s a lot of ink. But, while my Confidant is a little older, the current Baron Fig releases are much more capable of handling the ink. The Squire body is also compatible with other Parker-style refills if the Schmidt doesn’t float your boat. Personally, I have not yet found my perfect Parker/Schmidt refill, but I haven’t given up on it yet.

I really love this pen. It’s beautifully designed, well built, and a joy to write with. But as you may have noticed, it’s difficult not to compare it to the Retro 51. They take the same refills, they have a very similar form factor, but one of them retails for $20 less and has several unique looks. Personally, I’ve had a couple issues with the Tornado’s narrow grip section, and the Squire solves that problem with style. If you’re a fan of minimalist design, the Squire is absolutely worth your consideration. If you’re looking for a well-thought-out pen that is built to last, check out the Baron Fig Squire, and keep an eye out for those limited editions!

Just one thought for the Baron Fig team. I’m sure the pen community would love a G2/EnerGel compatible Squire. Same beautiful design, just a little longer. Limited edition in 2018? Standalone product called the Knight? Just something for the wish list.

Check out the new Squire colors at Baron Fig.

If you use This Coupon Code at Baron Fig, we’ll both save money!