Recently, while cleansing myself of a long work week by cruising the pen and stationery section of my local Staples, I spotted a stack of Moleskine “Click Ball” Pens on the clearance rack. Well, if there are two things for which I am a sucker, its pens and clearance racks. Moleskine has a bit of a history as a brand, so I was curious to see where their pen ranked in the spectrum of a writer’s tool set. But first, a little history lesson. 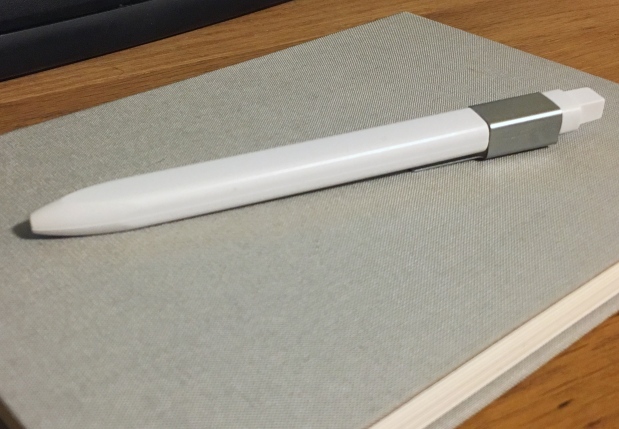 Whether it was a standard journal, pocket planner, sketchbook, or something with a little more flare, at some point, you’ve probably come into contact with a Moleskine at some point. Moleskine claims to be the “heir and successor to the legendary notebook used by artists and thinkers over the past two centuries: among them Vincent van Gogh, Pablo Picasso, Ernest Hemingway, and Bruce Chatwin.” Each and every Moleskine product I’ve seen also includes a small info leaflet making the same claims. Now, after reading their “Philosophy,” I was able to clarify these claims that serve as the foundation for their entire marketing strategy. They are the notebook of artists like Picasso and Hemingway, but only in a spiritual sense. Based on their description of the inspiration and brand creation, pretty much any bound pocket notebook can be considered the “heir and successor” to those great names.  I do have a few things to say about their paper, but now is the time for pen talk. Let’s take a look at this pen.

The Moleskine Click Ball is a retractable rollerball pen. It has a rectangular ABS plastic body and click mechanism, unique brushed steel clip, and a parker-style plastic refill. The rectangular body measures about eleven millimeters wide by eight millimeters thick by five and one half inches long. The shape is reminiscent of a carpenter’s pencil, and while the shape has many benefits, I was initially concerned about comfort while writing. The pen is light and fairly well balanced with the weight shifted slightly toward the metal clip on the back end.

The side clip is easily the most unique feature of the pen. The single piece wrap-around design allows the clip to hook over pages or pockets similarly to other pens, but it is also opened on one side and spaced away from the pen body. This gap was designed to allow the pen to clip onto the side of a standard hard cover Moleskine journal.  Unfortunately the clip is just barely too narrow to accommodate the cover of a Rhodia or Baron Fig hardcover books, but it does fit over the Leuchtturm  cover without much extra effort.

Where the experience really suffers is with the refill. The pen uses a plastic parker style refill which is available in 0.5 or 1.0 Rollerball widths, as well as a Gel version. The parker refills are very easy to replace with a few different brands,  but ideally a manufacturer would want to included the best possible component out of the box so the consumer is immediately satisfied with their purchase. That does not appear to be the case here. Out of the box, the stock refill had a bit of a rough start. To be fair, the pen could have been sitting on the shelf for a while, maybe the ink on the tip just got a little dry. Unfortunately, on every subsequent use of the pen, the stock refill had just as much trouble starting up as that first time. When the ink does flow, it flows fairly clean. There isn’t much noticeable skipping, the black in lays down a respectable 0.5 size line. The pressure required to write is pretty standard for a rollerball pen, which is to say; more than a gel or fountain pen.

Overall, the pen isn’t terrible to write with, but the shape takes a little getting used to. The click mechanism is entirely plastic, but still feels stronger than a random over-the-counter clicker pen. That said, I would prefer the travel distance on the return click to be a little shorter. When you want to return the pen to its retracted position, you have to press the clicker down until nearly flush with the pen body. It just doesn’t have the right feel.

So. Should you buy it?

Well, probably not. The only reason I would expect someone to seek out this pen is if they are a hardcore and exclusive Moleskine user.  I picked this pen up for $7 on “clearance,” but other retailers still have the pen available for the full retail price of $15. Even at half the MSRP, I have trouble recommending this pen. It’s an interesting and sleek design, but the execution leaves a bit to be desired. Style over substance seems to be Moleskine’s business model these days. If you do happen to find yourself in possession of one of these pens, definitely switch out the refill immediately.

Disclaimer: This pen was paid for by the Author for the purposes of review.

Photo Disclaimer: I’m working on a photo setup in my new place. Bear with me.