I still fee like that guy, for the most part. I’ve gained a strong understanding and respect for the scope of pens available at every level of investment. Well, this year I got a bonus at work, so I decided it was time to invest in something that will last a lifetime. As the old saying goes, treat yo self.

Karas Kustoms is an Arizona based company which designs and manufactures, among other things, fine writing instruments with modern style and durable materials. Their first machined pen, the Render K, was announced in October of 2011 and a Kickstarter campaign brought it to life shortly thereafter. Since then, they have expanded their line to six pen models available in a wide variety of colors and materials, all machined and assembled at their shop in Mesa, Arizona.

Jump in with both feet

The first Karas Kustoms pen I bought after days, or maybe weeks, of consideration was a Brass Render K with an aluminum grip section. Having accumulated several fountain pens already, I was in search of a ballpoint or gel pen for situations where a fountain pen was either not available, or not practical. And, having been spoiled by my fountain pens lately, I had really lost the taste for stock plastic over-the-counter pens. I decided on the Render K over the Retrakt or the Bolt because 1.) You can turn it into a fountain pen with a few extra parts and 2.) I’m very particular about the feel of a good click pen and I had no way to test the retractable mechanism before the purchase. (If it doesn’t click hard like a Parker Jotter, I’m not interested.)

Karas Kustoms ships their pens in a well protected cardboard box which holds and displays the pen as though it is a rod of raw material. It was clearly packed with care and attention, but neither pomp nor circumstance is present. The brass pen sat in this box, gleaming with potential. I was honestly struck by the look of this pen when I opened it up. Figuratively, of course. Had I literally been struck, the effects would still be obvious, as this is a substantial instrument. The Brass RenderK weighs in at 3.3 ounces, or 93.55 grams. For comparison, the TWSBI Eco weighs only 21 grams in total. The polished brass look of the pen really stands out, but the pen will quickly gain a patina with use. You can re-polish the pen, but another factor that attracted me to the brass in the first place was the fact that this pen will essentially age with me through daily use. A year from now, Five years, this pen will look completely different from its original sheen, and completely unique to the thousands of its siblings out in the world. This is MY pen. There are many like it, but this one is mine.

Under the cap, or hood if I may mix my metaphors, is the grip section. In my case, I went with polished aluminum. Partially because I like the dual-tone look, and partially because of some made up symbolism about the outside becoming dirty and used by the world while the inside remained shiny and pure. Polished aluminum, however, is just the standard option. You can also order your pen with a tumbled raw aluminum, brass, or copper grip section at additional costs. The aluminum grip appears smooth, but is actually very lightly textured with parallel micro-lines that you can just barely feel if you run your fingernail across them. What these lines do is provide a positive grip surface, so the pen stays in your hand far more comfortably than with a completely smooth surface. My only major concern with the grip section was that I would end up with scratches all over the side from removing and replacing the cap. As of the time of this writing, I have either been uncharacteristically careful with this pen, or the grip is more durable than I thought, because there are no visible scratches or marks on the grip after 3 months of semi-daily use. This is a HUGE plus for people (like me) who treat these tools like precious objects. It’s nice to have a pen that I don’t have to worry about. I mean, I still worry, but I don’t have to.

The pen ships with a black Pilot G2 refill in the 05 size. This is one of the most common and widely used disposable refills, with good reason. The G2 has a pretty consistent writing experience on any paper type, so it’s no wonder that Karas Kustoms decided to design the pen around it. With the stock barrel plug and wide spring installed, all you have to do is drop in the refill and you’re ready to go. But the pen is not limited to the G2. You can also use any other G2 size refill such as the Pilot Juice, Schmidt FineLiner, and Pentel EnerGel to name a few.

If the G2 refills don’t float your boat (or write your novel, if I may adapt the idiom to the genre), Karas also ships the Render K with a narrow spring, extra plastic plug, and length of tube for specialized fits. If you want to drop in a Parker refill, or the Schmidt P8126 or other Retro51 type refill, just drop in the black plug and swap out the spring. Simple as that.

But let’s get down to brass tacks, so to speak. If you follow me on social media I assume you have a somewhat similar mindset and are asking the same question that plagued me for so long. Why should I spend $75 on a sleeve to hold a $2 disposable refill? The simple answer is; you shouldn’t. But we don’t use fancy pens because we like “simple answers” now do we? No. Simple answers are for people who are fine with an old clicker-pen they “borrowed” from the bank, people who don’t have a minimum of three pens on their person at any given time, or people who write out of obligation, not a deep-seeded necessity. We call them Normies. We prefer the complex. We enjoy complicated filling mechanisms and nibs that are technically the same size but lay down completely different lines depending on where or when they were made. Or pen bodies that can handle no less than a dozen different types or brands of refills. We stain our hands with ink, and love it.

So, to get back to the point, should you buy this pen? I’m going to go with a “Yes, if…” on this one. Yes you should buy this pen if you really love versatility and durability in your tools. Yes, if you need a better way to utilize a gel pen when a fountain pen isn’t the best option. Yes, if you have room in your budget for it. Yes, if you appreciate the bold style of the design and execution. I wasn’t sure I made the right decision in purchasing this pen until I had carried it around and used it for a few days. For the level I am on, this is an investment piece. I don’t expect it to gain value or anything like that, but I do expect to be using this pen well into the future. It certainly feels like it was built to last a lifetime.

So what do you think of the Karas Kustoms RenderK? Let me know in the comments, and keep an eye out for my review of its cousin, the FountainK, coming soon. 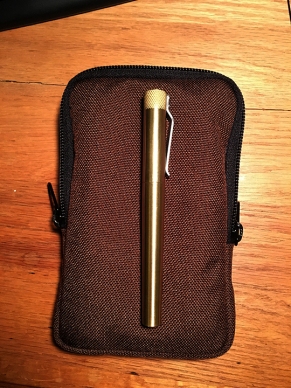 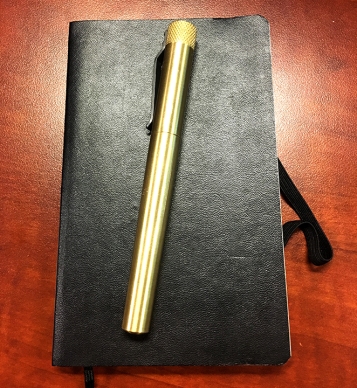 The Ultimate Refill Reference from The Well Appointed Desk

Disclaimer: The reviewer was not compensated for this post, and all products mentioned were purchased at regular retail price.

3 thoughts on “The Render K by Karas Kustoms”